This fact sheet examines the Magna Carta - the 'Great Charter'. The Magna Carta was important in the development of democracy and has influenced many other documents including the Australian Constitution. Learn about the 1215 edition, the 1297 Inspeximus edition and the legacy of the Magna Carta.

The first version of the Magna Carta, written in 1215, was a peace treaty between King John of England and his barons. It established the principle that all people, including the king, had rights and responsibilities under the law.

Prior to the Magna Carta, King John had absolute power as a feudal monarch. He gave the barons their titles and estates - lands - in return for their loyalty. King John was a cruel tyrant, who expected the barons to give him money and troops to fight a long war with France. The barons had to tax their people harshly to pay for the war and force men from their estates to fight in the ongoing conflict.

By 1215 the barons were fed up with the King's behaviour and many rebelled against him. They seized the Tower Of London and demanded the King listen to them. In June, in a meadow at Runnymede, the King and the barons met and agreed on the terms of the Magna Carta. As was common practice, the document was copied, fixed with the king's seal and sent to all parts of the kingdom to be read to the people, many of whom were illiterate.

In return for the barons pledging loyalty to King John, the Magna Carta limited the king's power, with most of the document detailing the rights of the barons under the feudal system. However, it also described the rule of law, including the important point that the king was subject to the law, like all other people. Individual rights and liberties were defined, with one of the most notable sections reading:

No free man shall be seized or imprisoned, or stripped of his rights or possessions, or outlawed or exiled, or deprived of his standing in any other way, nor will we proceed with force against him, or send others to do so, except by the lawful judgement of his equals or by the law of the land.

To no one will we sell, to no one deny or delay right or justice.

Almost immediately, King John ignored the Magna Carta and broke his agreement with the barons. He died in 1216 and his 9 year old son, Henry lll, became the king. As he grew, Henry's guardians made 3 more editions of the Magna Carta in an attempt to win back the support of the barons. Some changes were made but many of the original ideas stayed the same.

In 1225 King Henry lll issued the fourth, and heavily revised, version of the Magna Carta, in return for a kingdom-wide grant of tax. As his father had before him, the king fought with the barons. In 1264 Simon de Montford, a baron, overthrew the king and became the ruler. De Montford believed that the king's power should be limited. He called together knights and non-noble representatives from across the kingdom to meet in a parliament. Although it would be many years before parliament met regularly and included commoners in its ranks, the idea of the modern parliament had begun.

In 1265 de Montford was killed on the battlefield by King Henry's son, Edward, who succeeded his father as king in 1272. Throughout the 1200s, the Magna Carta was increasingly quoted as laws were made and petitions were prepared against the unfair use of power.

Edward l ordered an Inspeximus edition of the Magna Carta be reissued in 1297, so called because it inspected and approved the document signed by the previous king. In this edition, King Edward declared that the Magna Carta would from then on be a part of common law and that any court judgements that went against it would be 'undone and holden for naught'.

Although written in medieval England, the Magna Carta's significance has continued to the present. In its original edition, it mainly focussed on the troubled relationship between a feudal king and his barons. However, the Magna Carta's enduring legacy has been its statement of the basic rights and liberties of people under the law. This principle, first written into a document 800 years ago, has been developed and strengthened over the centuries, influencing documents as diverse as the 1776 US Declaration of Independence, the 1901 Australian Constitution and the 1948 Universal Declaration of Human Rights.

Perhaps 24 copies of the various editions of Magna Carta remain in existence, mostly held in English libraries or public collections. Parliament House in Canberra has on public display one of only two copies of the original 1297 Inspeximus edition held outside England. 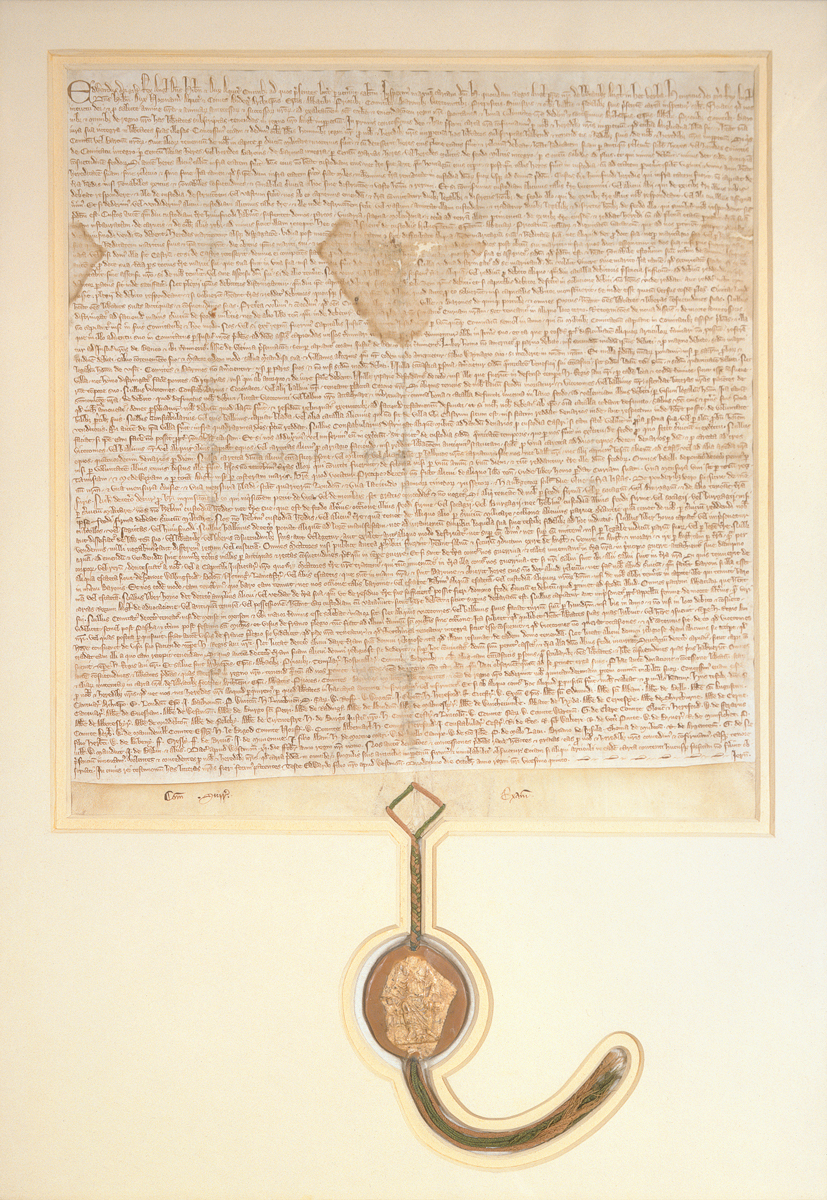 This picture shows a copy of the Magna Carta that is part of the Parliament House Art Collection. The rectangular document is covered in small, old-style writing. A seal hangs from the bottom.

A short history of Parliament