Begin your exploration of Federation with this short introduction. Find out the arguments for Federation and the process that led to the creation of Australia. Things you need to know In the cente of a ring of kangaroos stands a lion wearing a green jacket and carrying a cricket bat. His cap is printed with a Union Jack. The kangaroos wear blue and white stiped jackets with a yellow waist band. They are printed with 'New South Wales', 'Queensland' and 'Victoria'. An umpire watches on. Printed at the bottom is: 'Combine Aust! Umpire Punch: "You've done jolly well by combination in cricket field, and now you're going to federate at home. Bravo, boys!"'

On 1 January 1901, many Australians celebrated the creation of their new country with parades, fireworks and street decorations. In Sydney, 100 000 people watched the first national government being sworn in. This is the same number of people who watch an AFL or NRL grand final! 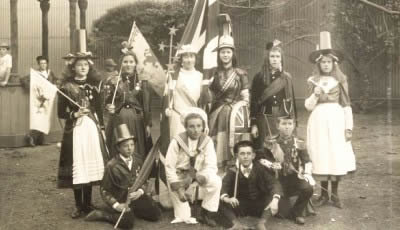 This fact sheet examines the path to Federation, the opening of the Australian Parliament and Australia's federal system of government. Discover the story behind Federation in Australia with this introductory video.