A petition is a request by a group of citizens for Parliament to take action to solve a particular problem. It is one of the oldest and most direct ways that citizens can draw attention to a problem and ask Parliament to help them. The Australian Parliament receives many petitions each year on many different subjects.

Presentation to the Parliament

The Senate and House of Representatives each have rules about how a petition can be presented to the Parliament.

In the House of Representatives, petitions are presented on Mondays by the chair of the Petitions Committee. These are presented along with any responses by government ministers to petitions previously presented to the House. The chair will usually give a short speech at the same time. Petitions can also be presented by another member of parliament.

Petitions can be presented to the Senate on any sitting day.

After a petition has been presented to Parliament, the text of the petition and number of signatures is printed in Hansard. A petition may be forwarded to the minister responsible for the matter raised in the petition for further consideration.

The right to petition the monarch and parliament to solve a problem dates back to the thirteenth century in Britain. At that time, proposed laws were little more than petitions to the monarch. Petitions in their current form date from the seventeenth century.

In the Australian Parliament, one of the most famous petitions was presented to the House of Representatives in 1963. This petition was presented by a member on behalf of the Yolgnu people of Yirrkala in the Northern Territory. It requested Parliament recognise their traditional land on the Gove Peninsula in Arnhem Land, which was under threat from mining. This petition combined bark painting, text in English and Yolgnu, and was decorated with Aboriginal designs. The petition is on public display in Parliament House. As a result of the Yirrkala Petition, the Parliament established a select committee to investigate the issue.

Some unusual petitions have been presented to the Senate, including one that was written on a jacket and continued on a roll of cloth. This petition related to the textile, clothing and footwear industries and was presented on 2 April 1992.

Petition presented in the Australian Senate to stop tariff cuts. 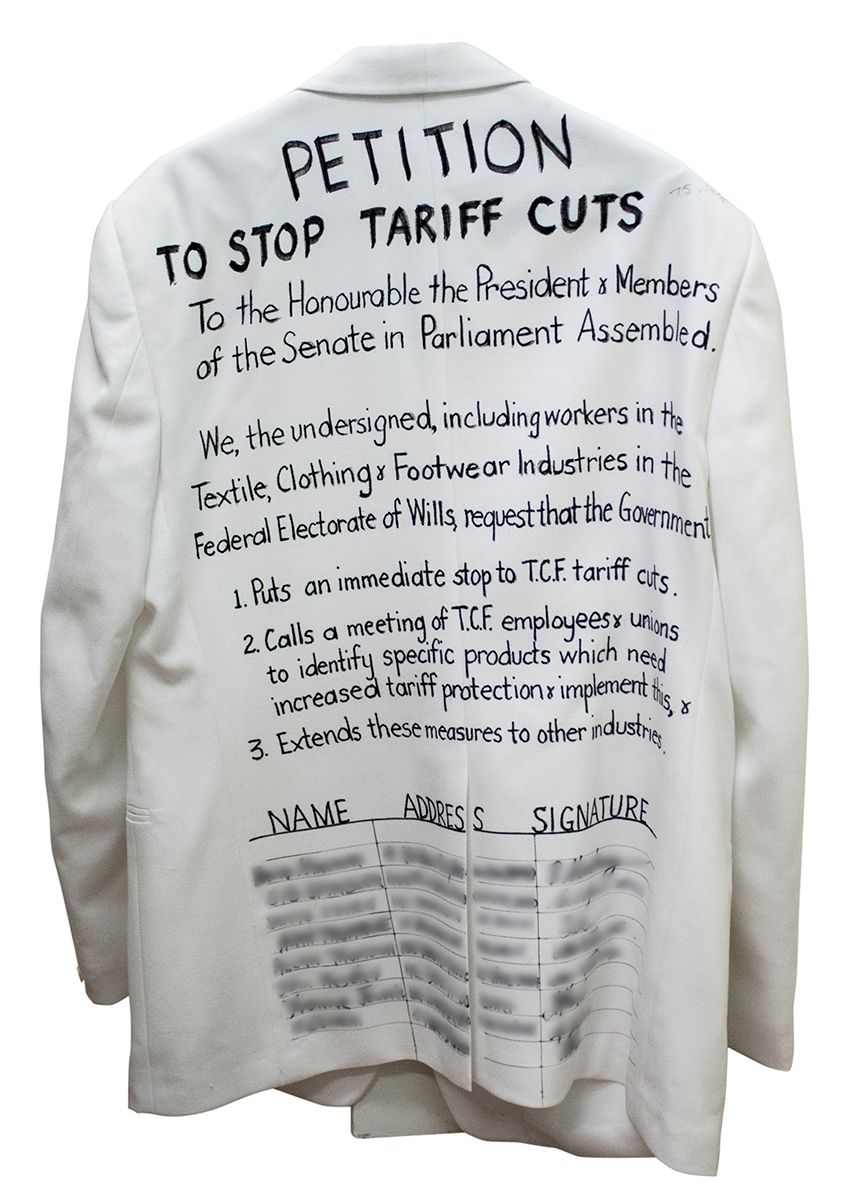 The Department of the Senate

This is a photo of the back of a white dinner jacket which has been written on in black marker. The writing says:

‘PETITION TO STOP TARIFF CUTS To the Honourable the President and Members of the Senate in Parliament Assembled. We, the undersigned, including workers in the Textile, Clothing & Footwear Industries in the Federal Electorate of Wills, request that the Government: 1. Puts an immediate stop to TCF tariff cuts. 2. Calls a meeting of TCF employees & unions to identify specific products which need increased tariff protection and implement this. 3. Extends these measures to other industries.’

This is followed by a table with the following headings: Name, Address and Signature. The signatures have been blurred out. This photo shows 2 large rectangular pieces of bark. Each has a border decorated with traditional iconography of animals including turtles, snakes and fish. Inside each decorated border is a piece of paper with typed words, followed by handwritten signatures and stamps. The contrast of the written papers and the imagery of the borders is particularly notable.

Permission for publication should be sought from the House of Representatives Table Office at Table.Office.Reps@aph.gov.au