This set of PEO posters and classroom guides is what you need to explore the Australian Parliament and Australia’s system of government in your classroom.

One complimentary pack is available per teacher.

There are no items in your cart.

Who is it for?

How can it be used?

The PEO teacher pack has everything you need to get students involved in parliamentary education in the classroom.

Display the posters to stimulate classroom discussion, and use the activities in Teaching civics and citizenship and Rights, power, action to explore democratic processes through role-play, negotiation and problem solving.

Introduce the Australian Parliament and system of government with Your Parliament.

One free PEO teacher pack is available per teacher.

Please indicate on your order form if you would like Rights, power, action included in your pack. PEO democracy poster: A man in a suit walks down the grass roof of Australia's Parliament House. A mob of sheep is in front of him. The text reads:

Who is responsible for Australia's democracy?
Don't be a sheep. Learn. Engage. Act
peo.gov.au

Senate poster: A poster of the the empty Senate, part of the Australian Parliament. It is titled: 'The Senate. Parliament House, Canberra'.

Australian Constitution poster: Different coloured rectangles with text and images on one side of the poster. The other side has a map of Australia composed of icons. The text reads:

The black cover of Teaching civics and citizenship: a classroom guide.

The purple cover of Your Parliament: How the Australian Parliament works.

The 8 posters in the Australia's prime ministers poster set. This set of large posters covers a range of parliamentary and Australian system of government topics. They are ideal for display in the classroom. A practical guide for exploring concepts relating to our system of government with upper and senior secondary students. 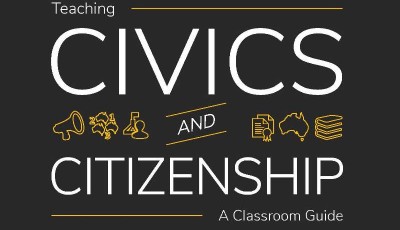